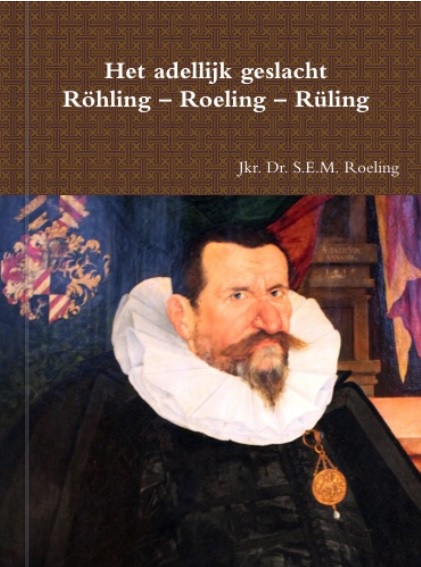 Thank you for your visit to the website about the noble house of Röhling - Roeling - Rüling.

The genealogy of the Röhling family starts with Heinrich Rulico von Hagen. Heinrich was born around 1200 and ruled as Vogt von Hagen in Saxony (present day Germany). Legend has it that Heinrich descends from the Saxon warrior Hathagat, who was described by Widukind von Korvei.

His offspring was active in the mining industry in Saxony. At that time the name developed into Röhling, later Roeling, Rooling and Rüling. The mining industry brought great prosperity and they held high official positions. The separation between entrepreneur and civil servant was not always clear in their decisions. However, because of this they did play an important role in the history of Saxony.

At that time, the family was extensively involved in marriagepolitics. For example, we find marriages with descendants of Adam Ries, Valentin Weigel, Lucas Cranach der Ältere and Barbara Uthmann. As a result, there is also a relationship with Goethe and Empress Catharina II of Russia.

Two brothers who moved to the northwest of Germany became the founders of the Danish and Dutch branches of the family. The Dutch branch started in 1810 when Herman Hendrik Röhling settled in Kethel (near Rotterdam). Many descendants today live in the region of Rotterdam and The Hague. The majority of the Dutch branch was active as livestock farmers until the mid-twentieth century.

There are several branches of the family living in the US today, these are the Iowa branch and Minnesota branch. The founder of the Iowa branch was Hermann Eilard Rohling, who was originally an carpenter and mason in Altharen (see: 19.16 in the genealogy). The founder of the Minnesota branch was Hermann Heinrich Rohling, farmer in Haar, Germany (see: 20.32 in the genealogy).

Mads Lange Röhling (see: 20.59 in the genealogy) was a member of the Danish branch who also settled in the US. Mads left Denmark with the SS United States of the Scandinavian American Line from Copenhagen and arrived at Ellis Island, New York on June 24, 1913.

I hope you will enjoy the information found on this website. Please consult the glossary if you have trouble reading the Dutch text.

If you have any questions about your family relation with the Röhling family please do not hasitate to contact me.

If you would like to buy the Dutch book just click the lulu button or cover on the right and you will be redirected to the lulu.com website.